Expanding the Circle: You are what you speak - Kate Thomas 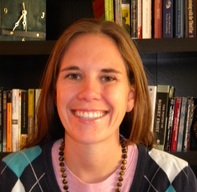 Katherine M. Thomas
Michigan State University
For me, one of the most exciting aspects of our recent conference in New Haven, CT was the diversity of topics across presentations, which shared a common interpersonal focus, but often little else. The diverse application of core interpersonal themes to various disciplines is at the heart of the Expanding the Circle column. I am always interested but rarely surprised when researchers find something consistent with a core principle of contemporary interpersonal theory without setting out looking for it. Such is the case for the focus study for this column, in which the authors sought to determine how novel voices are perceived and discerned a two-dimensional structure representing dominance and warmth (McAleer, Todorov, & Belin, 2014).

Many exciting new methods in interpersonal theory take advantage of our tendency to continuously perceive and judge others in our daily lives. We anticipate reactions from individuals we know well and predict behaviors from strangers. McAleer and colleagues (2014) focused on the snap judgments we make upon hearing a single word spoken by a stranger. After hearing a stranger say hello, can we predict how trustworthy he is, or how competent she is? As scientists interested in social behavior, can we organize “snap impressions” of voices into a simple but comprehensive taxonomy?

To tackle these questions, McAleer and colleagues (2014) had students from the University of Glasgow (n = 64; half male) read an unfamiliar passage containing the word "hello." A different set of over 300 student participants rated their "first impression" of these individuals on various trait domains, such as aggressiveness, confidence, and likability. McAleer and his colleagues conducted a Principal Components Analysis (PCA) on these ratings to determine their structure. For both male and female voices, a two-dimensional solution defined by a valence (likability; trust) axis and a dominance axis explained 88% of the variance in trait ratings. Although the structure of voices was highly similar across males and females, ratings of attractiveness correlated more strongly with dominance in males (r = .72) but more strongly with valence in females (r = .74). This finding is consistent with stereotypical norms of masculine versus feminine behavior (Wiggins, 1991) as well as research which suggests female likability largely hinges on warmth whereas male likeability hinges more on perceived competence (e.g., Feinberg et al., 2012).

After making first impressions, many of us tend to over-generalize these judgments and assume that momentary behaviors reflect stable attributes of an individual. I naturally assume the cashier who greets me with a friendly hello is a kind person. Right and wrong, most of us make broad assumptions automatically based on snap judgments. And we often do this without skepticism or awareness of the process.

McAleer and colleagues (2014) discuss diverse applications of their research, such as how findings can be applied to business and advertising. To me, this paper is another example of using an innovative method to study real-time personality process. By zooming in to examine a single, specific vocal behavior the authors assessed individual differences of core interpersonal dimensions. I would be eager to examine how ongoing vocal reactions relate to other aspects of interpersonal functioning. For instance, does complementarity happen at the level of voices? After hearing a friendly hello, are we more likely to respond with a friendly hello ourselves? After hearing a dominant hello, do we match this vocal assertiveness, or complement with a more submissive reply? These questions will involve a lot of work for another day (and probably another set of researchers!), so for now, as you move through your daily lives meeting new people, be conscious of how you say hello and remember, you are [perceived to be] what you speak.