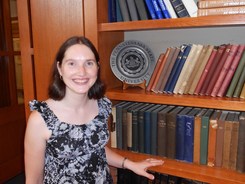 Lacey Wallace
Penn State Altoona
Adolescence is a particularly intriguing period of the life course for sociologists and psychologists alike. It is the point in life when parents and other caregivers often cede some degree of autonomy/agency and responsibility to their children.  Correspondingly, this time period is also associated with children spending less of their unstructured time with parents and more time with same-age peers.  Much existing research has focused on the extent to which peers influence attitudes, behavior, and self-concept (Brechwald & Prinstein, 2011) as adolescents attempt to find status and belonging in their peer groups.  As a criminologist, my research focuses heavily on the link between this drive for social status and another key trend that occurs during the teen years: the rise in criminal offending.  For many types of crime, rates of offending rise during the late childhood years and peak in the 15 to 19 age range.  Young offenders often commit crimes with peers.  Yet, the link between peer offending and one’s own offending is more complex than the notion of peer pressure would imply.

Siblings, for example, are a key source of behavioral influence for many adolescents, especially for behaviors like substance use.  Unlike parents, they are generally closer in age to peers.  Some siblings even share peers.  Yet, not all siblings are equally influential.  Sibling influence is conditional on the degree of social status or popularity attained by that particular sibling.  Indeed, I found that older siblings with more friends had a greater influence on their younger siblings’ marijuana use than less popular older siblings (Wallace, 2015).  In other words, adolescents emulate the behavior of siblings they see as socially successful, not those who themselves struggle with belonging/communion.

Likewise, even peer influence is conditional on markers of agency and communion (i.e. status and belonging).  Several years ago, I had the opportunity to be part of the PROSPER (Promoting School-Community-University Partnerships to Enhance Resilience) Peers Project.  PROSPER fosters cooperation and evidence-based intervention planning among schools, researchers, and others.  The particular project I was involved in focused on data from youth in Pennsylvania and Iowa (Osgood et al., 2013).  One section of the surveys used as the basis for the study asked youth in middle through high school to list the names of their same-grade, same-school friends.  In doing so, we were able to match their data to the records of those peers.  This allowed us to examine the link between social status and behavior in detail.  Notably, we focused on the variety of ways that individuals can be connected to one another through their peers.  Adolescents vary on outdegree and indegree, for instance.  These terms refer to the number of individuals an adolescent claims as friends, and the number of individuals who list a particular adolescent as a friend, respectively.  We found that beliefs about friendship are not always reciprocated.  Adolescents also vary in the extent to which they have multiple ties to peers within a peer group versus a loose connection to only one or two members of a peer group.  These markers of social status impact behavior and the spread of behaviors through peers.  In our research, we found that core group members were more likely to drink than more loosely connect or isolated adolescents (Osgood, Feinberg, Wallace, & Moody, 2014).  Isolated adolescents, those lacking peer connections, were more likely to smoke.

While some forms of delinquency, like underage drinking, are viewed as socially desirable by adolescents, victimization can be costly.  I recently worked with a colleague to study how violent victimization can impact peer connections (Wallace & Ménard, 2017).  Past research has found that youth have higher rates of violent victimization than other age groups (Finkelhor, Turner, Shattuck, & Hamby, 2015).  In our own study, we used data from the National Longitudinal Study of Adolescent to Adult Health (Add Health) to explore how being shot, stabbed, jumped, or being threatened with a knife or gun associated with changes to number of friends.  We suspected that the social stigma surrounding victimization, as well as other effects of victimization like depression or anxiety, might lead adolescents to lose friends or distance themselves from peers.  Our suspicions were indeed supported by the data.  Crime victims lost friends after being victimized. Females and those with depressive symptoms experienced a more severe drop in number of friends than others as well.  This is especially troubling given that victims may need or benefit from just these sorts of social supports.

As I hope these examples demonstrate, adolescents are faced with many pressures to conform to peer expectations.  Adolescents worry a great deal about belonging.  In some contexts, this worry leads youth to adopt delinquent behaviors viewed as desirable by peers, like drinking or marijuana use.  As sociologists and psychologists, we worry about behaviors like these because early onset is often associated with either concurrent problem behaviors or later struggles with addiction.  In others contexts, pressure to conform and belong involves avoiding individuals whose traits or circumstances mark them as tainted in some way.  Social isolation can be quite damaging at any age.  For adolescents in particular, it is associated with smoking, an addictive behavior with substantial consequences for health.

Our understanding of these processes is by no means complete.  Research on the link between social status and other problematic behaviors, like weapon carrying, remains limited.  Many existing studies only measure friendships, behaviors, and other constructs at yearly intervals, making more short-term changes difficult to assess.  Others, including some of the studies I have used in my own research, are now dated and may not represent the changing patterns experienced by millennials.  These are pressing needs in this research area.  Yet, I am encouraged by emerging projects and studies that incorporate multidisciplinary teams.  Our understanding of agency and communion is only strengthened when we work together rather than as separate disciplines.