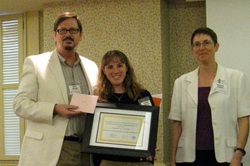 Resigning from my role as the Chair of the Graduate Student Advisory Committee.

For those who don’t already know, I have decided to resign from my role as the Chair of the Graduate Student Advisory Committee (GSAC). One of the primary responsibilities of the GSAC is to adjudicate the Annual Wiggins’ Award. Having not been able to attend the conference last year, and unlikely to be able to attend again this year, I felt it made sense for me to step down. Having chosen a career path somewhat outside of academia, my freedom to attend conferences is less my own and more in the hands of others, unless I attend at my own expense using vacation time. I do hope to continue to attend SITAR conferences in the future, when I can, and expect to bump into many of you at other conferences, as well, given our shared research interests.

Rather than just sneak away in the night unnoticed, the Newsletter committee invited me to say a few departing words…I actually think they said “wise” departing words – but that might be a tall order!  I will, however, take this opportunity to reflect on what I’ve seen the GSAC accomplish during my time as the Grad Student Rep, a member of the GSAC, and the Chair of the GSAC.

Looking back over my tenure with SITAR, it is amazing to me to see the growth that the society has experienced. There has been an increase in student membership (including expansion to students outside North America), a formalization of the roles and responsibilities of the Graduate Student Representative (GSR), the creation of the graduate student advisory committee, the creation of a student research award and student travel grants. All of these have contributed to SITAR becoming a society where students have the opportunity to build both agency and communion as they carve out their own research careers. I’ll reflect briefly on each of these advances below.

I attended my first conference in 2000 in Evanston, IL. I believe there were 27 professionals and 16 students. By 2013, the numbers have flipped! I wasn’t able to attend the conference last year, but I understand that there were 16 professionals and 26 students! It’s very encouraging to see that SITAR continues to have a consistent attendance almost every year and that student membership continues to grow.  It’s also notable that this growth has not been limited to North America, as we now regularly have international representation at the conferences. Further, many students feel so comfortable attending SITAR that they sometimes do so in the absence of their mentors. I think this speaks volumes to the warmth and communion that the society offers and the agency that our student members possess.

As it grows, SITAR has also managed to further develop and formalize its support of students. Although I acted as the GSR on the EC for over 5 years, during that time the responsibilities of the role were not clear and there was no set duration or tenure for the position. Since then, the role has been well-defined with a clear set of responsibilities, a maximum two year tenure to ensure the opportunity is passed on to others, and a formal application and appointment process. Clearly defining the role of the GSR in this way, ensures that the best applicants are afforded this excellent opportunity to work on the Executive Committee of an International scientific society and ensures that student voices are, and continue to be, an important part of the decision making process for the society.

Another development that has come to fruition since the early years of SITAR is the creation of the GSAC that includes professional members of the society as well as the GSR. This too further supports the role of the GSR and student voices in SITAR. The dedication and commitment that SITAR has made over the years to its student membership is impressive and this, I believe, is why SITAR has become a constant for so many of us. Those who started as students have now made their way through the ranks, presenting regularly at conferences, becoming GSRs to the EC, and now many sit on various committee’s and as members at large on the executive committee. In fact, I’ve been around long enough to watch as the students of SITAR have become the leadership of the society (e.g. Marc Fournier, Emily Ansell, Nicole Cain, Sandro Sodano, etc). Now the students are the mentors and they are bringing their own students to the conferences. I remember the first time that Marc Fournier arrived with students in tow – this might have been the first of the new generation and it was one of the first signs of sustainability for the society. I hope that this continues. So far so good!

Part of what I think has helped, and will continue to in the future, is the development of the Jerry S. Wiggins Award for Outstanding Interpersonal Research by a student, which is now in its 6th year, and the student travel grants, now in their 4th year. Watch out folks, the winners of the Jerry S. Wiggins Award just might be the future presidents of SITAR! Every year the bar is set higher as the quality of the research increases and the role of the judges gets harder. Similarly, with the generous donations from the members, the student travel grant, which supports students attending the conference, has resulted in the student attendance now exceeding that of the professional membership!

Thanks for the great memories SITAR and for helping me develop both personally and professionally. I look forward to the next time I am able to attend a conference, and until then, wish you all the best for the future as you continue to thrive as a society.

The Graduate Student Advisory Committee is reaching out to the membership to ask for donations to the student travel grant fund. The student travel grant fund, first introduced for our 2011 conference, helps defray travel costs for students who are presenting their research at the annual conference. SITAR is registered with the US Internal Revenue Service and State of California as a nonprofit tax exempt organization under IRS Code 501(c)(3). As such, your donation may be fully deductible as a charitable contribution on your US tax return(s).

As you may know, SITAR continuing to make considerable efforts to become more visible internationally, and to expand its membership. A key component of this process continues to be attracting young researchers to our meetings and promoting their return as members. All indicators suggest that the travel grant program has been effective in promoting these objectives. However, the travel grant program can only be successful with the support of SITAR’s professional members.

Please consider making a tax-deductible donation to the travel grant fund. The window of opportunity is closing fast for helping a student presenter attend the upcoming meeting. We have a record number of 23 applicants this year! Any amount will help us in reaching our target of US$ 1300.  To meet the high demand for finds this year, SITAR pledges to match the dollar amount of every donation that is made.

Donations can be made through a secure PayPal site using your credit card at: