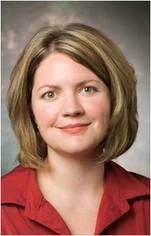 SITAR President,
Emily Ansell,
Yale University
Hello fellow Interpersonal Researchers! I hope everyone has recovered from the altitude and chilly nights of Park City this spring. It was wonderful to venture out west for our annual meeting. The SITAR conference took place at the end of May in Park City, Utah in tandem with the festschrift for one of our founding members, Lorna Smith Benjamin. Both proceedings were intellectually and communally stimulating. The graduate student members set new precedents for the level of cutting edge research presented in polished and sophisticated talks, leading to a difficult competition for the Jerry Wiggins Student Award.  In addition, the heterogeneity and size of attendance supports the conclusion that SITAR, and interpersonal research in general, continues to grow, both in terms of junior researchers and in the return of familiar faces.

The conference week kicked off with festschrift presenters reflecting the diversity of impact that Dr. Benjamin’s research has had on the field. This continued during the conference with a SITAR spin-off of the “In the Actor’s Studio” interview with Dr. Benjamin led by Dr. Tim Smith.  The discussion was enlightening, humorous and thought provoking. Research presented at the conference included novel methodologies for assessing social perceptions, laboratory assessments of dyadic interactions, intensive repeated assessments of social interactions, interpersonal heterogeneity within DSM diagnoses and psychological constructs, and commentaries on theoretical models of interpersonal functioning and psychopathology. The diversity of thought and methodology reflects the directions of growth of interpersonal research in recent years. As has become characteristic of SITAR conferences, the dinner at Chimayo in Park City was a resounding success, filled with fantastic food and delightful conversation. Many thanks to our conference chair, Sandro Sodano, and our on-site coordinator, Tim Smith, for a fantastic program and conference. Please take a look through our conference photos section.

I also want to extend congratulations to our Jerry Wiggins Student Award winner, Michael Roche (PSU). He was joined by two honorable mentions, Jenny Cundiff (Utah) and Katherine Thomas (MSU).  I was impressed by the quality of student research presented this year and received several similar comments from the membership on the novelty of student work. I believe this is, at least in part, a result of our organization’s commitment to the development of student members in recent years. The competition for the Wiggins award, the support of student attendance through travel grants, and the mentorship offered by more senior members of the organization is having a definite impact on the next generation of interpersonal researchers. So congratulations members! A long term goal has been to focus on young investigators and our efforts are having an effect!

As I hand over the president’s gavel and wrap up my last column, I want to thank the membership for giving me the opportunity to lead this organization and the executive council for their support and guidance.  SITAR has always meant a great deal to me and has impacted my career in multiple ways I am surely still realizing. I am grateful for this opportunity to give back to the organization. As we reflect on the successes of SITAR in achieving its mission for graduate students, I hope the membership and executive council will continue their focus on the burgeoning cohort of young investigators we have cultivated. There are multiple ways in which this may manifest: through formal networking opportunities or external mentorship programs or by supporting researchers who continue to embark on interpersonal research during the next steps of their career development. As an organization we have the opportunity to develop and grow a programmatic focus on young investigators, thereby maintaining and growing our membership while attracting the brightest minds to continue interpersonal focused research throughout their careers. Let’s keep the circle of interpersonal researchers growing!